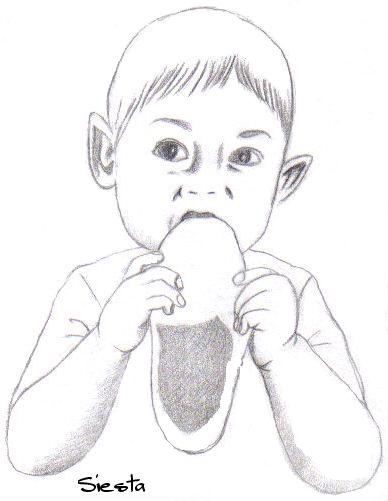 "So, this is your little boy? Oh, he's darling," gushed Nenniach. "What's his name?"

"It's Haldir," smiled Galadriel, fussing over the stockings her elfling was trying to yank off of his feet. "No, no, little warrior, it won't do for you to have cold footies," she cooed. Nenniach reached down and tickled the bottom of one of Haldir's kicking feet with her fingertips, causing him to suddenly pull away and laugh.

Both ladies grinned at his reaction. "So, is he talking yet?"

"Nearly? Is he still making cute baby coos," asked Nenniach, reverting herself to speaking in some sort of gibberishy manner to the little elf who was trying without success to crawl off of the blanket he was on and into the tall grass. "Can you say na-na, Haldir? Haldir, can you say na-na for your naneth?"

Without speaking further on the matter, Galadriel left Nenniach to play with her son as she fixed some cooked carrots, mashing them up in a small bowl. "Time for lunch, sweetie," crooned Galadriel, scooping Haldir up and settling him in her lap.

The first spoonful of carrots was batted away. "Yuck!"

Laughing merrily, Nenniach bit her lip at the withering look Galadriel gave her. "Oh, nearly, he can nearly talk?"

"It's all he says," Galadriel half-groaned.

"Where did he pick that up from?" wondered Nenniach. Galadriel shook her head as she managed to feed some of the mush to Haldir while Nenniach ate an apple to keep from laughing.

Celeborn, returning from his survey of the borders, approached the small picnicking party just as Haldir was finishing his meal, which consisted more of Galadriel poking spoonfuls stealthfully into his mouth as the youngster smeared his fingers around the mostly empty bowl of orangey smush. "Afternoon to you, ladies," he said with a wink. "I don't suppose you've something left for a weary traveler?"

"Apples, and some mashed up carrots," replied Galadriel.

"Yuck!" announced Haldir happily. He pointed up at Celeborn with both hands, fingers splayed. "Yuck! Yuck!"

Rolling his eyes, Celeborn bent down despite the cringe from his wife and picked up his son, immediately changing his look from pristine elf lord to messy elven peasant in three seconds. "Perhaps we could find a new word for him?" questioned Celeborn as 'yuck' rang out from the elfling who clapped his hands and sprayed and orangey pattern on his clothes.

"We've been working on that," Galadriel assured him. Wearily, she looked around at the mess. "I need to clean up. Can you take him back home? He needs a nap."

"I can do that," said Celeborn as he started to walk away.

"Here, take the basket with you," she said, tossing the few remaining items into it before handing it up to her husband. "Oh, and here, the plates and the cups," she added, and then a few more things were handed to him, until the only thing remaining was the slightly soiled blanket with two ladies sitting upon it.

"Are you sure there's nothing else?" asked Celeborn sarcastically.

"I still have a shoulder free, I could toss you over and carry you back as well."

"I'll take you up on that at a later time," she smirked.

Celeborn blew her a kiss, albeit awkwardly with all of the cargo he had, and headed toward the Great Mallorn. "You're so lucky to have him here with you," Nenniach said as Celeborn disappeared out of sight. "With so many off at war, you're lucky that he stayed."

"I know," nodded Galadriel solemnly. She relaxed with a sigh. "I don't think I could have done this on my own."

"Of course you could have," Nenniach told her as Galadriel felt around the blanket for something, frowning suddenly. "Something the matter?"

Nenniach lifted up her skirts as she stood, glancing around in the grass that surrounded them. "Did it end up in the basket?"

"No, I'm certain that-" Galadriel paused as Celeborn approached, carrying only Haldir, and the elfling carrying only a single, small item.

Lowering down upon one knee, Celeborn sat Haldir atop the other and faced him toward Galadriel. There was a very unhappy look on Haldir's face, and he was using one hand to wipe at his tongue. Upon realizing where they were, he flung the shoe onto the ground in front of his mother. "Yuck!" he stated as Celeborn rose up with him again, and a chorus of 'yucks' carried back to the pair of laughing ladies as Celeborn and Haldir walked away. 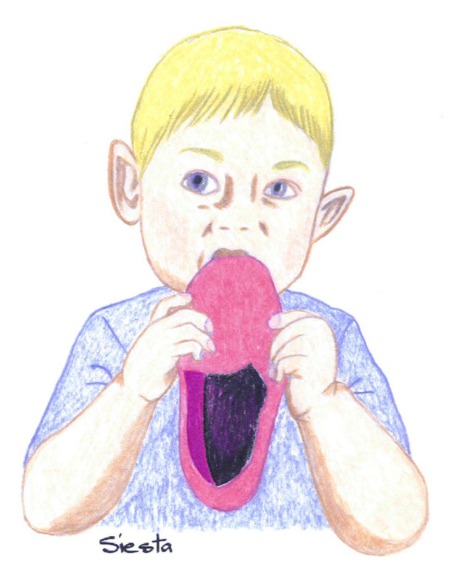 Back to index
Disclaimer: All publicly recognizable characters and settings are the property of their respective owners. The original characters and plot are the property of the author. No money is being made from this work. No copyright infringement is intended.
This story archived at http://www.littlebalrog.com/zhie/phoenix/viewstory.php?sid=353